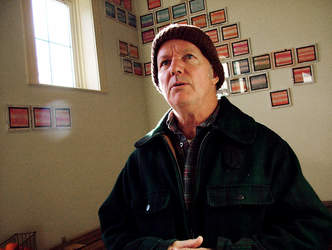 Coming of age in the late 70’s in a post Vietnam world I began my art career truly believing that we would never fight a war again thanks to the activism of the 60’s. I was one of the men born between ‘57, and ‘59, who were completely exempt from Selective Service registration. The aerial bombardment of Iraq in 1991 took me by surprise and began, for me, a gradual realization that I was a pivotal player in the cultural/political shift from a draft military to our current all volunteer military. Thus began a desire to evolve my aesthetic to change and take on more relevant content. Much of my work has since gained an activist perspective in order to begin identifying and defining emerging moral calculi and has lead me to explore more specifically; language, graphic or cartoon-like imagery, a schematic color palette, re-visit earlier interactive canvas structures and silk-screen printing. My attraction to these forms lies in their ability to interpret, archive, and engage in, the immense degree of digital communication prevalent today, while maintaining the resistance of a hand rendered traditional liquid medium base. Some of my hand-painted text drawings are static manifestations, expanded into a physical space, of online communication, that are interrupted, segmented and thus redefined by the formal convention of the picture plane. My interactive painting structures create an important transition toward a physical engagement with art that activates the viewer, bringing the higher orders of the art experience into a strange yet familiar pedestrian plane, freeing the viewer from their role of conformity and convention and challenging the siren call of the virtual. Ultimately my work explores the phenomenon of seduction and arrogance with regard to the development of technologies and hopes to engage and activate through the static intimacy of art.

"Kenny Cole's work is completely current and fresh, and has the smoking gun of sophisticated, 'make you think', power that comes with experience--- the ultimate cocktail!" - Carly Glovinski |