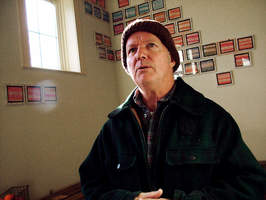 I grew up in a suburban “development” in Poughkeepsie, New York 100 miles north of NYC. After winning the Charles Burchfield Scholarship for Art I attended Pratt Institute in Brooklyn in 1976. At Pratt I studied under Howard Buchwald, whose post-minimalist/process teachings emphasized a reductionist’s approach to painting, with a consciousness toward the painting object’s physical relationship to the maker/viewer and the physicality of mark making. Upon graduation I found myself confronted with a burgeoning neo-expressionist art scene in New York City’s East Village and much of the artistic activity was played out as artist organized shows in various nightclubs and alternative spaces. My work thus adopted an edgy, graphic, second-wave graffiti sensibility, while still attempting to resolve issues of boundary, structure and device in relation to easel painting, and I created my first two-sided interactive painting structures at this time. In 1994 I moved to Maine with my wife and two children. I joined the Union of Maine Visual Artists and designed and maintained their first website, created a public flat file, organized an exhibit titled “Culture” and helped organize several political art actions. In 2000 I was invited onto the board of directors of Waterfall Arts, in which I served on for 10 years. During that time I created and maintained their first website, organized an interactive exhibit of Exquisite Corpses and built their Clifford Gallery exhibition space. In 2002 I met the political artist Luis Camnitzer through the Drawing Center’s viewing program and decided to commit myself more fully to creating politically engaging art. I have since then begun to re-visit making more elaborate two-sided interactive painting structures and have become even more determined to expansively explore the allure of the military economy. In 2017 I was awarded a mid career Esther and Adolph Gottlieb Foundation Grant.

"Kenny Cole's work is completely current and fresh, and has the smoking gun of sophisticated, 'make you think', power that comes with experience--- the ultimate cocktail!" - Carly Glovinski |